A lot of cyclists get bad rap for skipping stops and even running red lights.

I strongly feel that this isn’t just illegal, it’s plain stupid and dangerous and as a result, with the 2 exceptions noted below, you will never see me fail to stop at an intersection with a red light or a stop without making my mandatory stop.

A lot of cyclists complain that stops make you lose you momentum, but honestly, nothing makes you lose your momentum more than being hit by a car or a truck.

The road can be a pretty scary place: you have multiple users (drivers, cyclists, pedestrians, joggers) riding it, crossing it, buzzing around as completely different orders of magnitudes of speed.

There is only one reason the road doesn’t kill more people per year: predictability of the behavior of others.

When you cross an intersection at a green light, you trust that the people at the red lights will obey the law, otherwise, you would have to stop at the green light to ensure the compliance of the other riders. Interestingly, in many places, it is illegal to even stop at a green light so in those places, trust in the respect of the law from the other drivers is required!

When a cyclist doesn’t make his stops, he becomes unpredictable. For example, a few drivers in my area have come to believe that no cyclists will make their mandatory stops and are pleasantly surprised when I make mine.

But remember… drivers have seat belts, bumpers, air bags and a lot more mass to protect them during the impact than you do when you ride your bicycle. All you have (if you aren’t stupid enough to not wear one, and I chose that word carefully) is your helmet which will protect you from severe head trauma, but only in moderation: if you are run over by a car, say your prayers…

But stops aren’t the only rules that are ignored

Here are a few laws in the book in Québec, my province, which are routinely ignored by bicycle drivers which I feel only makes their ride on the road extremely dangerous

I often see bicycle riders on the left side of the road or on the sidewalk, with headphones on… You are not only in the wrong place, but you are not able to properly hear a car or a pedestrian warning you off!

Furthermore, flip-flops are not safe for riding a bicycle, a car or any vehicle. In fact, I personally believe they aren’t even safe for walking, but that’s another debate..

When I actually break the law

There are cases where I do break the law, and here they are:

Despite article 487 of the “Code de la route”, I do take the lane on 3 lane boulevards even if the law isn’t clear of when it applies or not…

Every person on a bicycle must ride on the extreme right-hand side of the roadway in the same direction as traffic, except when about to make a left turn, when travel against the traffic is authorized or in cases of necessity.

The law prohibits taking a lane, even in “cases of necessity” which are not clearly defined.

I maintain that in multiple lane high speed (70-90 KM/h) boulevard (which I have a legal right to ride on), it is safer for my own safety if I do take a lane to force a passing distance between the faster cars and my own bicycle while giving me room to swerve right if a driver presses the distance.

The problem is that right now, there is no law in Québec forcing a safe passing distance for a bicycle. Only for motorcycles and motorized scooters. There is reform coming to address that issue…

I do sometimes ride on the sidewalk in the few rare cases were doing otherwise would be too dangerous. Many underpass are not wide enough to provide a safe bicycle ride and as such, I choose the illegal by safer ride on the sidewalk. I also do when I ride on the Pie-IX bridge which exists in a gray area. I justify the fact that the bills of rights gives me legal protection to do what I need to do to maintain my physical safety…

I also do not do my stops in 2 distinct cases, one of which I also ignore a red light

If I am riding in a reserved bike lane on the straight side of a T intersection which doesn’t have a stopping line for the bike lane itself. You see such an image below from Google Maps. Notice the stop line for cars and the lack of one for the bikes. And yet, the law doesn’t officially allow bikes NOT to stop if the light is red, even if clearly, the road says otherwise… I maintain the road markings have priority over the law since it is more specific. 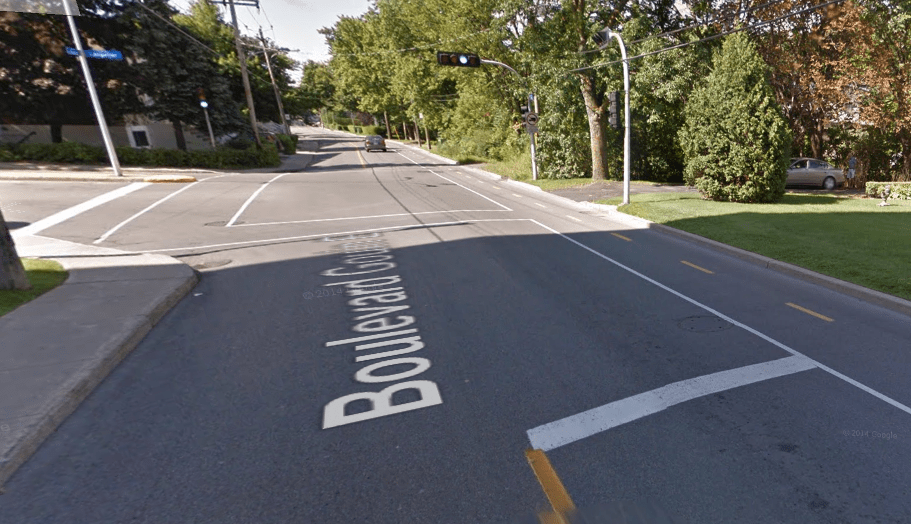 If a group bicyclists are riding together, Article 486 of the Highway safety code defines that group as a file:

When riding in groups of two or more, cyclists must keep in single file; in no case may such a file be composed of more than 15 cyclists. Article 486

I am not an attorney, but I maintain that the second part of the article may actually have defined a legal entity consisting of a cyclist file.

When arriving at a stop sign, there are 2 options:

In the first case, 4 cyclists legally would have to do the following sequence:

This is what the laws about stop signs appears to imply.

But if article 486 makes a cyclist file a legal reality, then the procedure is as follows:

In reality, this isn’t even how we cross as a family at a red light. Instead of keeping the file, we take the lane and go side by side to make it clear that at a green light, the drivers behind us will not overtake us in our lane.

We cross together and then, resume our single file after the intersection…

This makes it clear and predictable for the drivers about our intentions.

In short, please respect the law on your bicycle, and if you choose to break it, do so in a logical predictable and safe way, like I explained above…

And if you are still not being respected, there is something to help you, the Air Zound, a bike horn that is actually louder than a car horn… 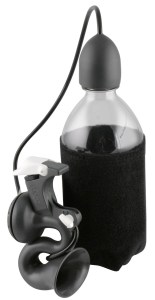